Draft of Welfare Reform in Slovakia 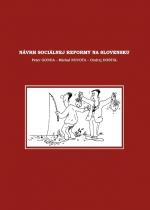 The social system in Slovakia, as well as, more or less, the social systems in other countries, is one of the crucial sources of important ethical, economic and social problems. We agree with Nils Karleby’s, quotation that „A society, where the individual effort to generate as much values as possible is replaced by the all-knowing tutor state, becomes soon a pauperized society of spongers.“

Also in Slovakia, there persists the long-term impact of such system distortions as the „culture of dependency“ on social benefits and other ways of the government „support“ of an important part of the population, the passivity of many people and their relying on others (mainly on the government) and low weigh of voluntary solidarity and private activities (not only) in the social sphere. Another aftermath of the system distortions is related thereto: high costs of the social system sustainment. These costs cause significant financial burden for the economic entities by the mean of tax and, first of all, social contributions; they restrict the employment incentives (for both employers and employees) and thereby constitute a significant obstacle for the business development and solution of unemployment, mainly the long-term unemployment.

During the last two years, the Slovak Government has implemented measures in social policy, which meant also unquestionable benefits. For example, the social trap was reduced (by the ceiling of total benefit for the family) and certain pressure was generated on the activity of the welfare benefit recipients. However, the large and highly set level of mandatory social solidarity and its aftermaths (mainly the excessive burden on business entities, consisting of high social contributions and suppressed voluntary solidarity) remained (almost) unchanged. For example, large financial benefits without counter-value demand remained unchanged; moreover to that, some of these benefits are universal (e.g. the child allowance). Various benefits are paid in cash; this often does not mean any solution to the poor person’s problem of income lack. This confirms that the government does not carry out systematic welfare reform with emphasis on long term and change of concept toward target-addressed social policy aimed to those who objectively need it.

Our goal is to introduce welfare reform with such emphasis to the common public. We attempt to come with solution of system distortions in order to contribute in synergetic manner, throughout solutions for milestones (such as reduction of long-term unemployment), to the poverty reduction and protection against it for those who really cannot take care of themselves and their families (see Chapter 4 for more details). With regard to the final perspective, we find only the emphasis on poverty issues as acceptable and legitimate for the social policy.

This publication introduces, first of all, our concept for the solution of the long-term distortions enduring in the social system. Therefore, we differentiate between the long-term perspective of achieving the desirable goal in the future and the milestones whose achieving might help to achieve the goal.

The welfare reform draft given in Chapter 4 is based on the following subsequent and mutually interconnected cornerstones:
▶ value framework of the reform consisting in balance between market and ethics;
▶ definition of the government role in the society as the base for determination of level of mandatory social solidarity (Section 1.1);
▶ fundamental principles in social affairs (Section 1.2);
▶ negative trends and distortions, which affected and affect in long term the definition of social policy worldwide, especially in European Union (Section 2.1);
▶ systematic problems and distortions of social system in slovakia (Section 2.2);
▶ examples of reform steps in Slovakia (Section 3.1) and abroad, e.g. in New Zealand and some U.S. states (Wisconsin, New York, Oregon and Colorado) – see Section 3.2.

The publication is available in English language here as an Adobe Acrobat PDF.

This publication is a part of the project of Conservative Institute of Milan Rastislav Štefánik “Draft of Welfare Reform in Slovakia“.

English version of the publication was financed by Atlas Economic Research Foundation.

The origin study included in the publication was developed with thanks to Permanent Conference of Civic Society as well as thanks to grant to Conservative Institute of M. R. Stefanik within the project called Institutional Development by Trust for Civil Society in Central and Eastern Europe.