organized in Bratislava on September 22, 2014 a another lecture within

Markets and Morals - a Natural Partnership

Lecture given by:
Madsen Pirie
President and one of the co-founders of the Adam Smith Institute (UK) 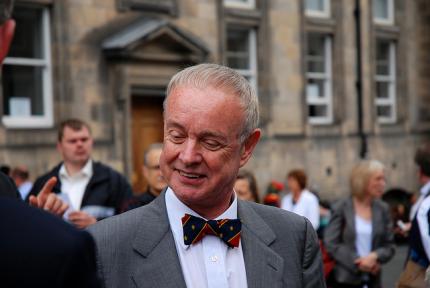 My name is Madsen Pirie. I am President of the Adam Smith Institute, the free market think tank which researches policy proposals that work towards a free economy and a free society. I was one of its founders.

Before that I was Professor of Philosophy at Hillsdale College in Michigan, teaching philosophy and logic to US university students. Earlier I worked briefly in the US Congress on Capitol Hill for the Republican Study Committee.

My university degrees are an MA in History from Edinburgh, a PhD in Philosophy from St Andrews, and later an economics MPhil in Land Economy from Cambridge. I continue my academic interests by publishing books about philosophy written for the intelligent lay reader. My most recent is 101 Great Philosophers – Makers of Modern Thought.

While At St Andrews I was one of the free Market libertarian group whose alumni included many who took part in the 1980s movement towards incentives, choice and economic liberalism. I have published books on Privatization and Micropolitics, amongst others.

With my colleague, Eamonn Butler, I have co-authored popular books on IQ – Test Your IQ, Boost Your IQ, and The Sherlock Holmes IQ Book. I was for 13 years Secretary of Mensa, the high IQ society, and continue to address its conferences occasionally.

Recently I turned to writing children’s science fiction, and have published three such books aimed at the 11-14 age bracket. My latest one, Tree Boy, should be published later this year.

At Cambridge University I am a member of Pembroke College, involved in the new Adam Smith Fellowship in Political Economy; and I was myself recently appointed as Senior Visiting Fellow in the university’s Department of Land Economy.

In February 2010 I was named, jointly with my colleague, Eamonn Butler, as winner of the National Free Enterprise Award for 2010, a prize whose previous winners include Sir Richard Branson, Lord Hansen, and Lady Thatcher.

Economics is Fun with Madsen