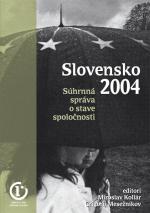 In the most recent population census conducted in 2001, more than one in eight Slovak citizens (13.1%) declared themselves as members of some ethnic minority. Most of them belong to the Hungarian minority that totals 520,528 people (or 9.7% of Slovakia’s population). In the same census, 89,920 Slovak citizens (1.7%) declared themselves as Roma; however, an extensive socio-graphic survey conducted in 2004 by the Institute for Public Affairs, the SPACE foundation, and the Regional Centre for Romany Issues suggested that the total number of Roma in Slovakia may be as high as 320,000; some demographic estimates even fluctuate between 380,000 and 400,000 (Koľko máme…, 2004).

Author is a director of the Conservative Institute of M. R. Štefánik.

This text corresponds the chapter of the book Slovakia 2004. A Global Report on the State of Society issued by the Institute for Public Affairs.

It is possible to purchase the publication published in English language here.