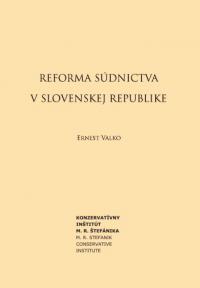 Despite of all changes after 1989, the Slovak judicial system remains inefficient. The well-reasonable public opinion makes the feeling that the judicial system is not independent, a citizen cannot enforce the justice and, often, and in repeated cases, the law is unenforceable or it is circumvented by the mean of various obstructions, the tribunals use different criteria to assess different cases and they are no instrument to erradicate the corruption.

The aim of the judicial system reform is the creation of all conditions to get this system in the Slovak Republic to the level equal to the most advanced countries, guarantee for the law and justice enforcement, increase of it's transparency and decrease of the corruption within the system, thus solving one of the key and most important society problems in the Slovak Republic.

The proposed judicial system reform gives the conditions for the elimination of it's key deficiencies. It requires the change of current laws and, in some cases, also the modification of the Constitution of the Slovak Republic. The reform is aimed to the increase of judicial system outcome efficiency, creation of human resources for qualified, independent and nonpartisan decisions of the judges, increase of the public awareness, more foreseeable law, public control of the judicial system, higher degree of guarantee for the defense of basic human rights and freedoms as well as the speedier civic judicial procedures.

The publication is available only in Slovak language here as an Adobe Acrobat PDF.

Ernest Valko (JUDr., PhD.) is a lawyer. He was graduated in the Comenius University Faculty of Law in Bratislava. In 1974, he passed the doctorate exam and in 2004 he defended the doctorate. Between 1977 and 1979, he was a professional expert working in the Ministry for Civil Engineering; from 1979 to 1988 he was the head of legal department in the same ministry; in 1989 he became an arbiter of the State Arbitration Court of the Slovak Republic and in 1990 the deputy of the commercial director of a concern company. Between 1990 and 1991, he was the Vice-President of the Lower Chamber of the Federal Assembly of Czech and Slovak Federative Republic and in 1992, Judge and the President of the Constitutional Court of the Czech and Slovak Federative Republic. From 1993, he works as a lawyer, inscribed in the List of Lawyers of both Slovak and Czech Chambers of Lawyers.
He is author and co-author of many expert articles published in professional journals (e.g. Bulletin slovenskej advokácie, Justičná revue, Právní rozhledy, EMP – časopis o českom a európskom práve, Obchodné právo).