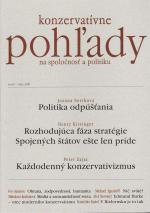 I am convinced that in principle it is Slovakia who decides about the destiny of Slovakia, not the European Union. The way Slovakia will look at home will be the same as the way she will look in the European Union. In this sense of the word, I am in favour of active domestic and foreign policy for Slovakia. Today, the Slovak policy more accepts and only little forms the reality of the Union.

I am against any acceptance of unified norms where it is useless and bureaucratic and where it only helps to start stopping mechanisms especially when it comes to the economy and social realm. Only dynamic economic and social policy may put Slovakia on a dynamic trajectory of education, culture and a higher quality of life.

I am against the conservation of the European model of a welfare state, but I am also against a state of social coldness. I am deeply viscerally convinced that man is not ‚homo economicus‘.

I am against the separation and isolation of the European Union from the United States. I am for a strong and united NATO which, being a strong link between the EU and the USA, has a fundamental and key significance for both the future of Slovakia, and the future of the EU. I am for the Europe of states. I consider the idea of a cosmopolitan Europe as well as the idea of a Europe of regions to be in the first case denying, and in the second case not respecting the European historical trajectory.

The article deals with deeper aspects of European integration at the moment of the accession of Slovakia to the EU.

Author is the President of the Conservative Institute of M. R. Štefánik.

The article was published in the magazine Conservative Views on Society and Politics (Autumn – Winter 2002).