Slovak Economy in the Process of Transformation 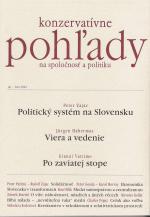 Deformation of the 40 year long centralistic system is deeply embedded in the behaviour of many people, even those who carry out business. They have probably become much more common and accepted than was expected at the beginning of transformation and possibly even more than the majority of people (including the intellectuals) are willing to admit.

Analytical assessments of the transformational changes in the economy and the substantiation of reasons for the impossibility of a long-term existence of socialism are still rare. The authors present a systematic view on the economic transformation changes and socialistic absurdities, as well as a view on the general prognosis for future development, and preconditions for economic development in Slovakia.

The authors see the objective factors („embedded socialistic deformation“) as well as the subjective factors (an inability to adjust to the changed circumstances) to a certain extent as the main reasons why the deformation of the previous system have not been removed more significantly.

The system of „social comfort“, which puts minimum pressure on personal responsibility, of an individual and family, is the dominant socialistic deformation which remains. The culture of dependency which was engraved in the minds of people by socialist governments, still remains. The authors do not suppose that value mindsets, ways of thinking and deeply rooted ways of behaviour by subjects, will undergo a serious change in the near future. The extent of economic activities, personal responsibility and labour mobility will also remain low. Despite that there is a real possibility that a notable quality change might be coped with using inner strenghts in a long-term period. Ireland, Finland and New Zealand may serve as examples. The main preconditions for it are a significant reduction in the government´s role in the economy, creation and keeping of transparent „game rules“ on the market, and minimisation of opportunities for the emergence and spread of immoral behaviour in economic processes.

Peter Gonda is an economic analyst for the Conservative Institute of M. R. Stefanik.

Karol Morvay is an economic analyst for M.E.S.A. 10.

The article was published in the magazine Conservative Views on Society and Politics (Spring – Summer 2002).