organized a lecture given on May 14, 2009 in Bratislava within

Samuel Gregg
Director of Research at the Acton Institute (USA)

Samuel Gregg has written and spoken extensively on questions of political economy, economic history, ethics in finance, and natural law theory. He has an MA in political philosophy from the University of Melbourne, and a Doctor of Philosophy degree in moral philosophy from the University of Oxford, which he attended as a Commonwealth Scholar and worked under the supervision of Professor John Finnis.

He is the author of several books, including Morality, Law, and Public Policy (2000), Economic Thinking for the Theologically Minded (2001), On Ordered Liberty (2003), and his prize-winning The Commercial Society (2007), as well as monographs such as Ethics and Economics: The Quarrel and the Dialogue (1999), Morality, Law, and Public Policy (2001), A Theory of Corruption (2004), and Banking, Justice, and the Common Good (2005). Several of these works have been translated into a variety of languages.

Dr. Gregg also publishes in journals such as the Journal of Markets & Morality, Law and Investment Management, Journal des Economistes et des Etudes Humaines, Economic Affairs, Evidence, Oxford Analytica, and Policy. He is a regular writer of opinion-pieces which appear in newspapers such as The Wall Street Journal Europe, the Washington Times, the Australian Financial Review, and Business Review Weekly. His op-eds are also widely published in newspapers throughout Europe and Latin America. Dr. Gregg is also an editorial consultant for the Italian journal, La Societa, as well as American correspondent for the German newspaper Die Tagespost. 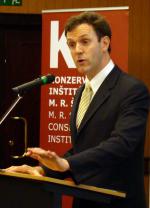 In 2007, Dr. Gregg’s book The Commercial Society was awarded a Templeton Enterprise Award. These awards are given annually to the best books and articles published in the

previous year on the culture of enterprise. The awards are designed to encourage young scholars to explore and illuminate the process by which economics and culture are related throughout the world.