organized on October 13, 2016 in Bratislava another lecture within the

Financial Markets and the Wealth of Nations

Jörg Guido Hülsmann
Professor of Economics at the University of Angers

Presentation for the lecture is available in PDF format here. 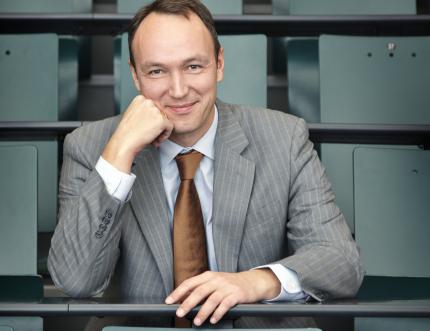 Jörg Guido Hülsmann is a professor of economics at the University of Angers, where he lectures on macroeconomics, on monetary and financial economics, on growth and development, and on financial risks.

He is also a Senior Fellow of the Ludwig von Mises Instituteand an elected member of the European Academy of Sciences and Arts.

Prof. Hülsmann has been invited to give key-note lectures and other presentations in twenty-three countries on four continents.

He is the author of seven monographs, most recently Krise der Inflationskultur (2013) and The Ethics of Money Production (2008), and he has edited or co-edited six other books, most recently The Theory of Money and Fiduciary Media (2012). His books and articles have been translated into twenty languages.

His current research focuses on the political economy of financial markets, as well as on the theory of money and banking. More detailed information is available on his website, at his university page, as well as in his CV.